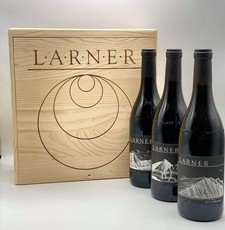 Petrology is the scientific study of the various rocks that comprise the Earth's components. There are only three types of rocks we find on our home planet, Sedimentary, Metamorphic, and Igneous. Sedimentary rocks are formed by the accumulation or deposition of small particles that subsequently become lithified by the cementation of mineral or organic particles mostly in the presence of water at the Earth's surface. Metamorphic rocks are born from the transformation of existing rock types, in a process called metamorphism, where the original rock is subjected to heat and pressure, causing profound physical or chemical change. Igneous rocks are formed through the cooling and solidification of magma or lava found within the Earth's lower layers interacting with the crust.

Each one of these rock types are formed from diverse orogenesis processes, where that energy and their creation is solidified into stone. A sense of power is involved with each rock type, the inspiration for winemaker Michael Larner to stylize Syrah from the estate into three distinct expressions:

"Sedimentary" a playful Syrah fashioned in a Californian image, with 3% co-fermented with Malvasia Bianca aged 3 years in new Russian Oak barrels - a maverick in the line-up.

"Igneous" a power-house Syrah inspired by Australian Shiraz, using an aussie-clonal selection aged 3 years in new American Oak barrels - its not just down under.

Housed in a unique branded wooden box, every rock or wine collector's necessity.